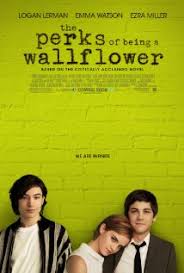 What is a Wallflower?
In social situations, a wallflower is a shy or unpopular individual who doesn\’t socialize or participate in activities at social events. The term comes from the image of a person isolating themselves from areas of social activities at ballroom dances and parties, where the people who did not wish to dance (or had no partner) remained close to the walls of the dance hall. —WIKIPEDIA
I felt like I\’ve watched a somewhat movie version of Catcher in the Rye. It tackles on the never-ending youth issues (e.g. bullying, sexuality, fitting in  etc.).. As movie watcher, I\’m one of the nakakarelate audience being a teenager and high school student. I don\’t know how closely the movie was interpreted from the book. My sister said it must be close because the author of the book is also the director. We\’ll never know because book and movie are two different mediums of literature/art. So I have to check out the book soon.
What I like about the movie is the presence of a role model of the teacher (Paul Rudd), supportive family and good friends. There are some unclear points in the story that I was hoping it was clearly elaborated or hinted in the book. As for the Emma Watson post-Harry Potter project, I could say she did a good job. She has grown up, speaking with no hint of British accent and proved herself that she has can progress her acting. As for \”Percy Jackson\” a good career move for a follow-up movie. Patrick is effective in his gay role.
The OST (Original Soundtrack) am not a big fan of it (that\’s why I can\’t even describe what kind is it) but genuinely fits the feel and mood of the movie. I could relate at some point that they base their \”moments\” into a appropriate song thus the mixed tapes. Cheesy but I love it! I think they have better tastes A list of literature/book that Charlie\’s teacher has passed for him to read. It\’ll serve as my future reference of books to be read by me.
The twist and revelations on the last 1/4 parts of the movie was enthralling. You won\’t want to miss a thing.

Photo from: HERE
Read more about the story: HERE